Do you need training variation or patience to get through this plateau?


Do you need training variation or patience to get through this plateau?

To answer this question, we must first break down exercise into its simplest parts.

If we were to reduce exercise and human performance to its simplest parts we would be left with two ideas. 1) You as a human are a collection of trillions of cells that form the various tissues and organ systems making up your physiology. 2) These cells are covered in receptors that receive and respond to stress in similar ways. This illustration (Fig 1) demonstrates the stressor-adaptation cycle, however we need to add a few layers before it is more “realistic.” 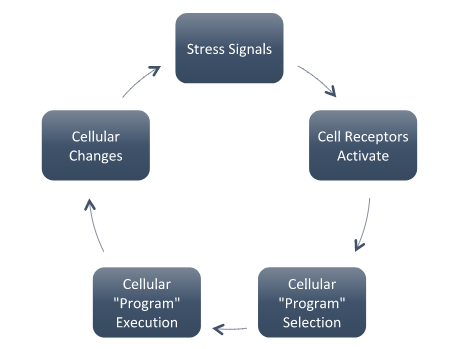 Hans Selye, an Austrian Physician, is credited with conceptualizing the “General Adaption Syndrome” (GAS)1 which roots the above into physiology. The GAS (Fig 2) outlines the phasic response of a physiological stressor, which causes a threat to homeostasis and then results in an adaptive response. This is the body’s attempt to effectively eliminate this “threat” [stressor] from causing a negative response in the future. 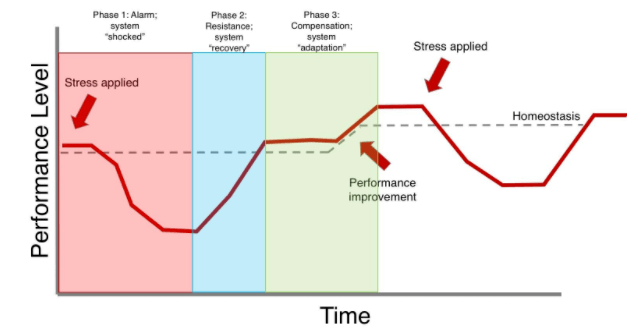 However, since your entire body can receive stress, to garner desired adaptations we must be very specific in how we apply stress. The Specific Adaptations to Imposed Demands Principle (SAID)2 represents this concept and can be considered as one of the governing principles of exercise adaptation.

If we take the above figure into consideration, we notice that a stressor that results in an adaptation causes a performance increase. As such, this new level of homeostasis, or baseline, by default will require a larger stressor to induce further adaptation in the future. The Principle of Progressive Overload 3 represents this concept and similarly becomes another governing principle of exercise adaptation. But, if everything were this easy we wouldn’t be here having this conversation. The real question is “what do we do when we don’t adapt?”

In training, there are bound to be cases where we feel like we aren’t gaining or adapting as expected from the GAS, SAID, and progressive overload principles. We may feel this way because the magnitude and rate of gains is less than expected. Commonly, the first thought that goes through our heads is “are we overtraining?” Naturally we want to avoid any form of negative adaptations or “decompensation” that comes along with overtraining (Fig 3). So, as a result, we may vary our training by reducing the volume, intensity, frequency, or changing exercises, etc. 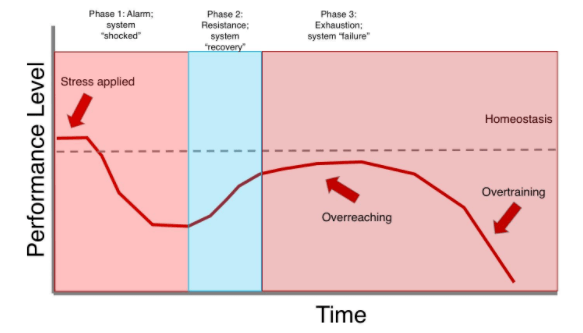 However, my question to you is “do you need patience or variation in times like these?”

Firstly, we must identify what overtraining is.

Overtraining is a chronic condition, two or more months, of decreased performance with mood disturbances.4 Overtraining also comes from relatively unknown causes, aside from prolonged “under recovery”, and with much confusion around the continuum of overreaching and overtraining in general.

In short, we will define overtraining as a long period of no performance increase, or consistent decline in performance accompanied by negative characteristics outside of the gym such as: being irritable, anxious, short-tempered, and chronically fatigued.

Overreaching on the other hand, may be defined as a period of “ups and downs” in terms of performance without the consistent and steady decline or disturbances in mood associated with the overtraining syndrome.

With that in mind, we need to ask a second question: “have any of you genuinely been overtrained? Or were you perhaps just overreached and impatient?”

Disclaimer: I am not recommending you attempt to overtrain or not exercise caution in the future.

I’m inclined to say that the vast majority of us have not truly been overtrained, but rather we have been on the brink of overreaching and due to well-intentioned fear, we have adjusted training prematurely. I do not say this from a place of naivety because I have intentionally overreached to achieve performance gains, and have overseen overreaching phases of many others. Take the following recount of the “Efficacy of Daily 1RM Training in Well-Trained Powerlifters and Weightlifters: A Case Series” study 5 from my time collecting data in Florida Atlantic University’s Muscle Lab.

For 37 consecutive days, experienced lifters (2 powerlifters with 10 years of training experience, 1 weightlifter with 5 years of training experience) squatted a daily one rep max (1RM) back squat and then completed 5 additional sets of volume (3’s with 85%, 2’s with 90% of daily one-repetition maximum-1RM) for science. This means I was overseeing the overreaching of these individuals and conducting 1RM tests for roughly 120 consecutive days.

Your initial reaction may be that this is a ridiculous protocol, and it would lead to overtraining. However, you are neither correct nor incorrect. The training protocol was indeed ridiculous, but it was also effective. This protocol raised 1RM strength between 3.1-8.4% from start to finish, but from 5.8-10.8% from start to each individual’s best day. So, for a 500lb squatter that 5-10% increase in 1RM in about a month added 25-50lbs to the bar. That’s nothing short of astounding, especially considering that rate of strength gains slows considerably the more trained you are.

Let’s take a closer look at the results from this study and see how it might relate to our questions (Fig 4). As you can see from the data, each individual was immediately met with a performance decrease and had to fight ups and downs until they made their first adaptation. This then raised their average performance above their 1RM from day 1. Individuals peaked at different times (day 35 to 37), but despite the continued ups and downs in performance they ultimately came out on top. If we were to experience this ourselves in training, we all may initially suspect that we are overtraining. However, that would be a bit short-sighted. Yes, each individual had a performance ups and downs for the first 5-7 days of training before being back around baseline strength. But, by the second week each individual made an initial adaptation resulting in increased performance relative to their day 1 or previous week. Without a prolonged consistent decrease in performance we can clearly see this as an example of functional overreaching. However, hindsight is 20/20 and unless you are a wizard, foresight probably isn’t that great. So, I still recommend proceeding with caution when you face potential overtraining, but I also think we could use a little more patience. 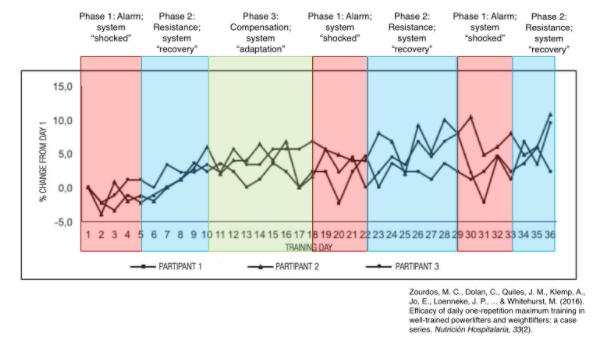 To help traverse the daily 1RM peaks and valleys depicted above, we used both objective and subjective methods to monitor recovery and predict performance.

Every day, we measured perceived recovery based on the Perceived Recovery Status Score Scale. 6 We used this scale as soon as individuals walked into the lab, again after their caffeine consumption (360 mg, AKA pre-workout), and again after warm-ups to track any change in their perceptions of recovery. Every day we also tracked both the Rating of Perceived Exertion (RPE) Based on Repetitions in Reserve (RIR), 7 and barbell velocity (measured by a tendo-unit) 8 on the final warm-up set (85% of the day one 1RM). All of this information was used to guide the 1RM attempt selection plan for the day, and analyzed after the study for predictive applications.

In general, caffeine consumption increased the perceived recovery of individuals going into the session, but did not always predict increased performance. So, you can’t always rely on how you feel after your pre-workout to determine if your session in the gym will be good or not. On the other hand, reduced perception of effort, or lower RPE and higher RIR, on the last warm-up was predictive of increased performance. Interestingly, this relationship occurred more often (in 3 out of 3 subjects vs 1 out of 3 subjects) than barbell velocity predicted performance. In other words, feeling like the warm-ups are easier is a better indicator of working set performance than either how jacked up you get from your pre-workout or how “fast” you move the bar on your heaviest warm up.

Final disclaimer: Daily 1RM training is mentally and physically demanding. It should be used sparingly and with caution only after great consideration of all other options. Novice and intermediate lifters will still be able to benefit from nearly any training protocol with much more moderate levels of volume, intensity, and frequency. Therefore, Daily 1RM training should be reserved for experienced lifters with technical proficiency and high mental and physical fortitude, and if used, used sparingly, as a peaking block.

To put this all together in some usable manner we must first remember that training for a performance gain is going to be hard, and it’s only going to get harder as we reach higher levels. This may eventually require more intense training methods or drastic approaches to achieve continued increases in performance. If you maintain solid footing in the governing principles of exercise adaptation discussed in this article, and exercise good judgement and caution, you will likely achieve your desired performance gains while minimizing your risks of overtraining. However, this might require overreaching. And in that case, consider the following: