It occurred to me that the vast majority of people are rather familiar with the fact that muscles grow if stimulated sufficiently; however, ask a passerby, or even a fitness professional and most will offer a generic answer to the question of “how do muscles grow?”. As we exercise or put our muscles through any type of trauma, it may be useful to understand exactly what happens to the muscle to allow it to grow. In this article, we will uncover the physiologic processes involved in muscle growth down to the minute cellular detail, buckle up Magic School Bus, we’re coming.

Ok, so to begin we have to educate ourselves a bit on the anatomy of the muscle; we do not need to know everything, but certain details will be useful to elucidate prior to the following section. Again, let us begin by taking a macro approach before zooming into the microscopic.

If you were to look at one of your limbs, like the ever revered bicep muscle, you will (hopefully) find a bulge, especially as you flex that muscle – this is called the muscle belly and is the meaty middle of the muscle. The muscle belly is attached on either end by tendons that keep it anchored to specific parts of your skeletal, bone structure. Now, from there, if we cut that muscle belly right down the middle along the thickest part and look into it, we would see a bunch of chord-like structures which make up the inside of the muscle belly – these are called fascicles. These fascicles are further made up of myocytes (muscle cells/fibers) that are long, thin, and run along the entire length of the muscle belly. These are the units we will investigate the most. However, inside these myocytes are myofibrils that also run along the length of the myocytes. These myofibrils are simply a collection of proteins that allow force to be generated. 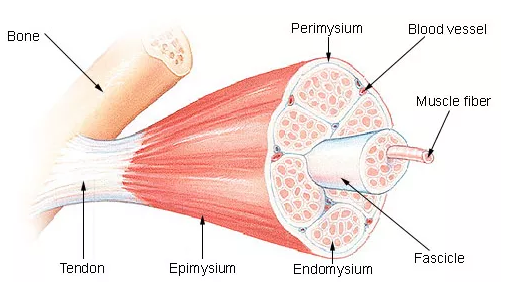 As you can see from this illustration, the fascicles make up the bulk of the muscle belly (not labeled). Do not worry about the epi, peri, and endomysiums - they are, in simple terms, "sheaths" for various sections of the muscle. Meanwhile, the smallest unit, the muscle fiber, is also interchaneagbly called the muscle cell and myocyte - more detailed illustrations of the cell are shown below. 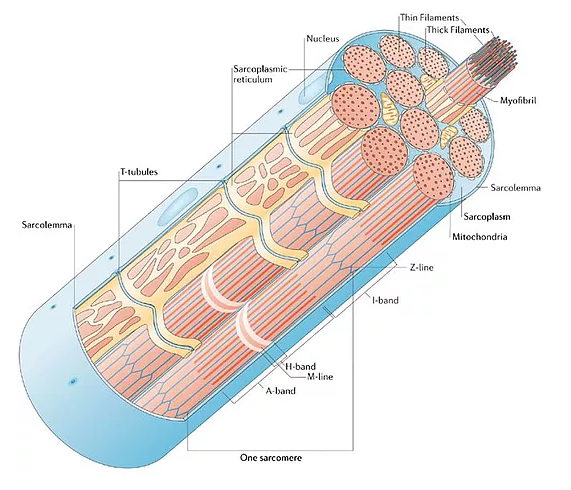 This is a "zoomed in" visual of a muscle fiber (myocyte). Most of these anatomical landmarks can be ignored for the purpose of this article, but notice the nucleus directly under the sarcolemma. Also, notice the sarcoplasmic reticulum covering the length of the sarcomere.

This is all we need to know to understand muscle hypertrophy from here on out, although, to be clear, there is much more detail to muscle anatomy that has been purposefully left out. 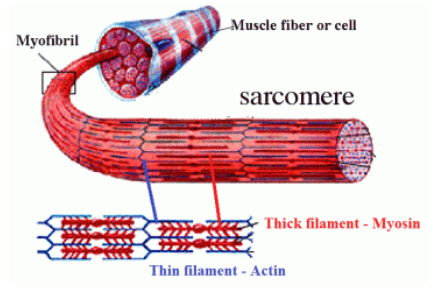 Here, the main component of the myocyte (muscle fiber), the myofibril, is made up of two proteins - myosin (also called "heavy" or "thick") filament and actin (also called "light" or "thin") filament. These proteins interact via a ratcheting mechanism that tenses or relaxes the sarcomeres, leading to contraction and relaxation of the entire muscle system.

How does muscle hypertrophy occur?

This is an exceptionally interesting section that should clarify exactly what occurs, cellularly, in the body in the event of triggering muscle hypertrophy (muscle growth). We will examine the process by breaking it down into two sections: Stimulus and Repair/Growth.

In a previous iteration of this article, the identified stimulus for hypertrophy was stated to be myocellular damage [1][2]. However, recent, compelling evidence has shown that while muscle damage does occur, it is likely not the primary driver of muscular hypertrophy [18]. So, the stimulus for muscle hypertrophy is likely something other – sensed tension and metabolic products [19].

Although the order of importance is still to be determined, mechanical tension, or cellular sensed tension, is a major stimulus through the stretch and the force exhibited generation in muscle [19]. Secondly, although only in order, it is possible to stimulate hypertrophy by the build up of exercise metabolites - such as lactate, hydrogen ions, creatine, and others - from short rest exercise bouts [19]. Finally, muscle damage does still play a role, especially in the beginning of training, as muscular damage tends to be high, and repair is necessary to rebound strength [19].

Activation of hypertrophy is detailed and complex, but through tension, the sheer stress placed on the muscle from resistance training via more contractile proteins linking, a more rapid firing rate of the motor unit (aka, neuron and muscle fiber bundle), and the stretch incurred on the fiber from movement lead to the increased activation of calcium dependent calmodulin (CaM) pathways, titin related “muscle LIM proteins (LMPs)” (among other proteins) translocating to the nucleus, as well as phospholipase D synthesis of phosphatidic acid A’s action, and myokine release [19][20][21][22][25].

To break this down: as calcium is released in higher quantities with each contraction induced by the neuron, calcium binds to calmodulin, which activate calmodulin kinases (CaMKs), and in turn, activates Akt, which activates protein synthesis via mTOR and the inhibition of glycogen synthase pathways [19][20][21]. 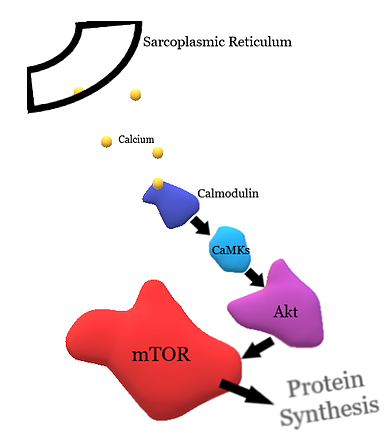 Now, the anchoring protein on the Z-disk of the sarcomere, titin, is also implicated, via stretch and force production, by the translocation of proteins, like the aforementioned muscle LIM protein, to the nucleus and the expression of genes for protein synthesis, independent and dependent on mTOR [22][23][24].

Also, the membrane bound phospholipase D (PLD) generates phosphatidic acid A, which interacts with mTOR, as well as bypasses mTOR and acts directly on downstream regulators, to induce protein synthesis [25]. This is done as an unperturbed cell membrane sequesters the enzyme, separating it from its necessary substrate to form phosphatidic acid A [26]. Disturbing that membrane leads to the necessary substrate making contact with PLD, leading to the production of phosphatidic acid A, and the activation of downstream mTOR protein synthesis regulators, independent of mTOR, initially, and the eventual activation of mTOR, itself [25].

Finally, myokines, like IGF-1 (also known as Mechano Growth Factor), are upregulated during resistance training, leading to an autocrine or paracrine fashion increase in protein synthesis via the Akt pathway [20]. Likely, these are not the only mechanisms by which tension generates hypertrophy, but they give us a good idea of the general mechanism by which hypertrophy can occur independent of muscular damage.

As a final note, it is also though that cell swelling, from edema, may also offer a hypertrophic effect, likely though a membrane sensory pathway (PLD pathway?).

Second, metabolite accumulation can occur as lactate, hydrogen ions (lowering pH), and phosphate molecules accumulate within the cell [23]. The accumulation of these, and likely other (like creatine), metabolites in the cell show an increased expression of Mechano Growth Factor (mentioned earlier) independent Insulin Growth Factor-1 (IGF-1), which increase the proliferation of satellite cells (discussed later) and increase protein synthesis via the Akt pathway [18][20][23]. Also, the increase in growth hormone (GH), which further increases the release of IGF and increases the release of Interleukin-6 (IL-6) for further effects on satellite cell recruitment (again, discussed shortly) [23].

Metabolite accumulation can also come in the form of increased reactive oxygen species (ROS) [23]. Reactive oxygen species have the ability to mediate the aforementioned PLD pathway, but also affect gene transcription directly, with hypoxic (lack of oxygen) situations heightening the presence of ROS [19][23].

Assuming a person is beginning training, they tend to suffer some muscular damage, which may or may not activate hypertrophy [18]. Regardless, to be able to return for another bout of exercise, the trauma to the sarcolemma, the reticulum, contractile proteins, and more lead the cell to release calcium (likely due to damage to the sarcoplasmic reticulum) into the surrounding extracellular area; this release of calcium leads to the activation of an immune response [3]. As soon as one hour after this event, neutrophils go through phagocytosis and clean up debris of dislodged and broken organelle proteins caused by the stress put on the myocyte [2]. 24-48 hours after myocyte damage, macrophages are the dominant immune cell finishing phagocytosis and releasing cytokines and growth factors to activate further immune clean up cells, as well as activating the repair process [2][3][4]. These cytokines, Interleukin-1, 6, and tumor necrosis factor (TNF) are the regulators of inflammatory response and communicate more or less need for further necrosis and inflammation between immune cells [2][4]. Growth factors such as growth hormone (HGH), insulin-like growth factor (IGF), fibroblast growth factor (FGF), and hepatocyte growth factor (HGF) are released to begin the repair process [2][4].

Satellite cells move across the outside of the myocyte to embed themselves into the myocyte and donate their nucleas, creating a myonucleus.

The satellite cell, anatomically speaking, is dominated by a single nucleus and this is the reason it fills in the gaps in torn myocytes – the nucleus is, after trauma, donated to the myocyte to increase the number of nuclei – this is the remaining reason muscle damage may still offer some hypertrophic benefit [18][19]. This helps, because the myocyte is limited in its size, at least partly, due to its nuclei number spanning along its length; this is due to the fact that there must always be an appropriate proportion of nuclei to sarcoplasmic space called the myonuclear domain [6]. This myonuclear domain is the proportion of nucleus to cytoplasm, or in the case of the myocyte – sarcoplasm, and this proportion is a type of “ceiling” or cap for how much hypertrophic growth can occur [7]. So, while these relationships are not completely accepted in the scientific community, the current level of understanding indicates this growth stage to be multidimensional.

Growth, hypertrophy occurs in the synthesis of more specialized proteins (via the multitude of avenues discussed earlier – calmodulin, mTOR independent and dependent protein synthesis, PLD, etc.), not by the replication of the muscle cell [3]. This synthesis is visualized by the increase in size and density of the muscle as more myofibril strands, made up of myosin and actin contractile proteins, are created. If tension on the myofibrils of a myocyte is too much, the myofibrils tear, as well; this tearing of the myofibrils leads to the splitting of the myofibrils, creating more of these myofibrils, as well as the necessary functional proteins within – hence the need for muscle protein synthesis [8][9]. This increase in the size of the myocyte requires more nuclei, and these are supplied by the satellite cells, and this increase in myofibril amount and compensatory increase in nuclei increases the myonuclear domain [1][2][7][10].

There we have it; the muscle can go through three determined stages – tension sensation, metabolite accumulation, and muscular damage for the end goal of muscular hypertrophy; a definitive change from the predominant idea that muscular damage is the primary mechanism of hypertrophy.

This article is a guest blog post by Nicolas Verhoeven.