Lessons from Studying the Most Successful Weight Loss Dieters

Over 30,000 people use the RP Diet Coach App every month. They pick the foods they want to eat, and the app tells them how much to eat and when. App users choose diet duration and body weight goals, and the app makes recommendations for altering the diet (increasing, decreasing, or leaving food amounts the same) throughout the process in order to keep the user on target.

In our quest to make the app a better coach and further our understanding of what dieting parameters best predict success, we’ve been collecting (anonymous) data from app users. We now have over 10,000 completed diets. Our first peak at the data gave us clues about likely best duration, loss-rate, and adherence to diet-change recommendations; it can be found here.  This, our second look, focuses on what choices seem to be common to successful dieters. We broke our diet data into four groups:

First, here is a list of the variables we have not looked into yet and that, at first glance, do not appear to make a dieter more or less likely to be successful:

Now, it’s not that those variables don’t affect diet success at all. Many of them probably do! You can’t just get four hours of sleep every other night and expect to be as successful on your diet as you would be with a regular eight-hour-per-night sleeping habit. In many cases all of our dieters had pretty similar averages in terms of hours of sleep or number of meals, so we will need more data and careful analysis to get at these variables.

Below we list average weight lost as a percent of initial weight as well as average absolute weight lost for each group: 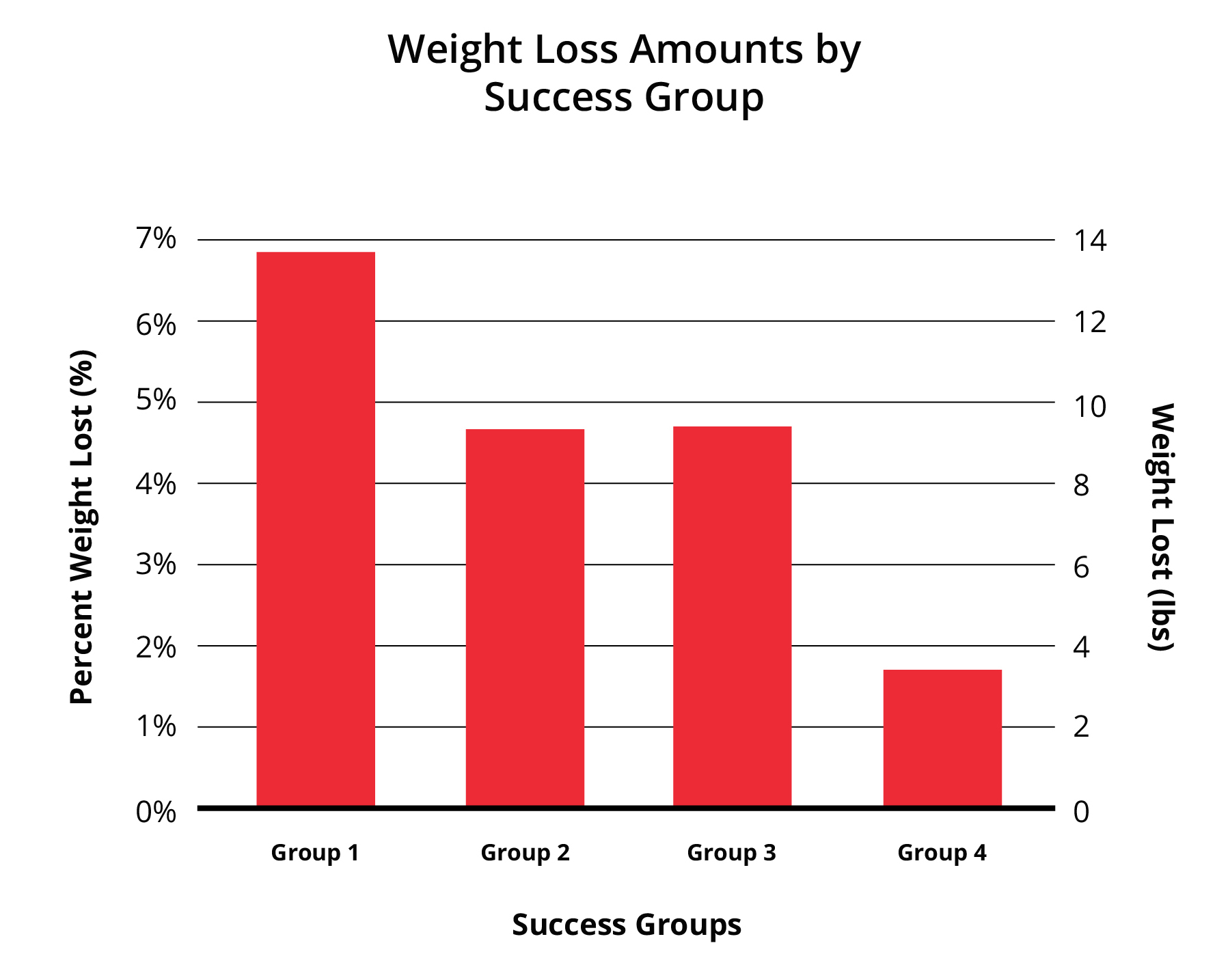 Interestingly, it looks like group 1 dieters (the overachieving group) as well as group 2 dieters (those that met their goals) seem to both have been more likely to choose a six rather than 12 week diet. Group 3 (those who lost some weight, but missed their goal) was also more likely to diet for six weeks than for 12, but by what appears to be a smaller margin. Group 4 dieters (who lost less than half of what they planned to lose), in contrast, seemed to choose the longer duration diet more often. The most successful dieters seem to be favoring shorter diets. 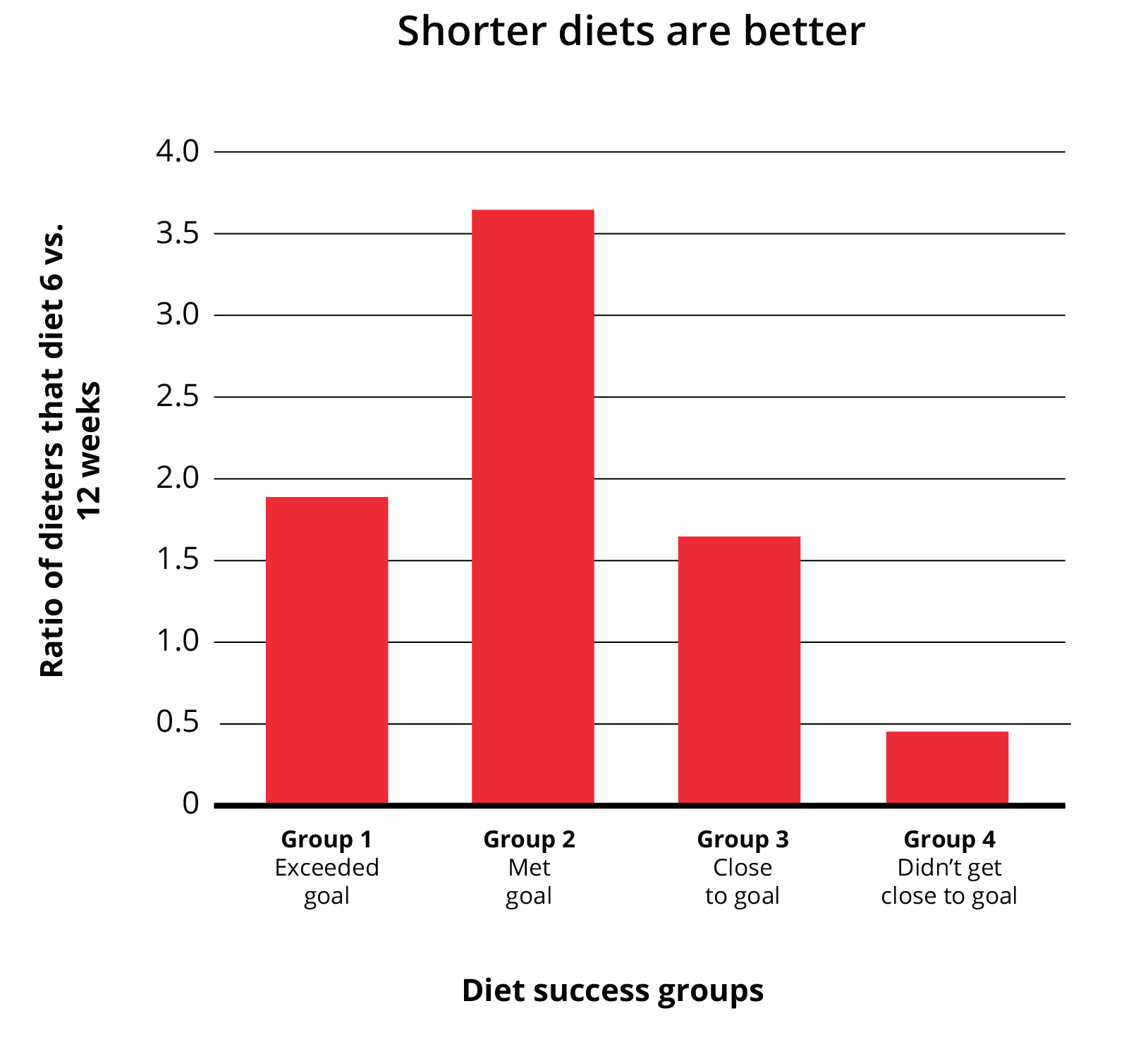 *The higher the ratio, the SHORTER the average diet was.

Something especially interesting is that even though the more successful dieters seemed to opt for the shorter diets, they still appear to have lost more weight on average than those opting to diet for longer! The most successful group lost in six weeks what the least successful failed to lose in 12. In addition, Group 2 (the “on target” dieters) lost almost as much weight as Group 3, and thus managed to get about the same results while dieting for less time on average.


Does this mean that those who want to be successful should diet for shorter durations? It may or may not, but it certainly makes trying a shorter duration diet worth considering.

The second thing we noted, was that successful dieters seem to take app AI’s recommendations more often. Group 1, the diet over-achievers, chose to take the app AI’s advice on raising, maintaining, or lowering food amounts during the course of their diets about 92% of the time! Group 2 and 3 took the app AI’s suggestions about 89% and 86% of the time respectively. Group 4 dieters, the least successful with respect to their initial goals, followed the app’s guidance only about 74% of the time. It seems that the most successful dieters may have done what the app’s AI asked them to do more often than the other groups. 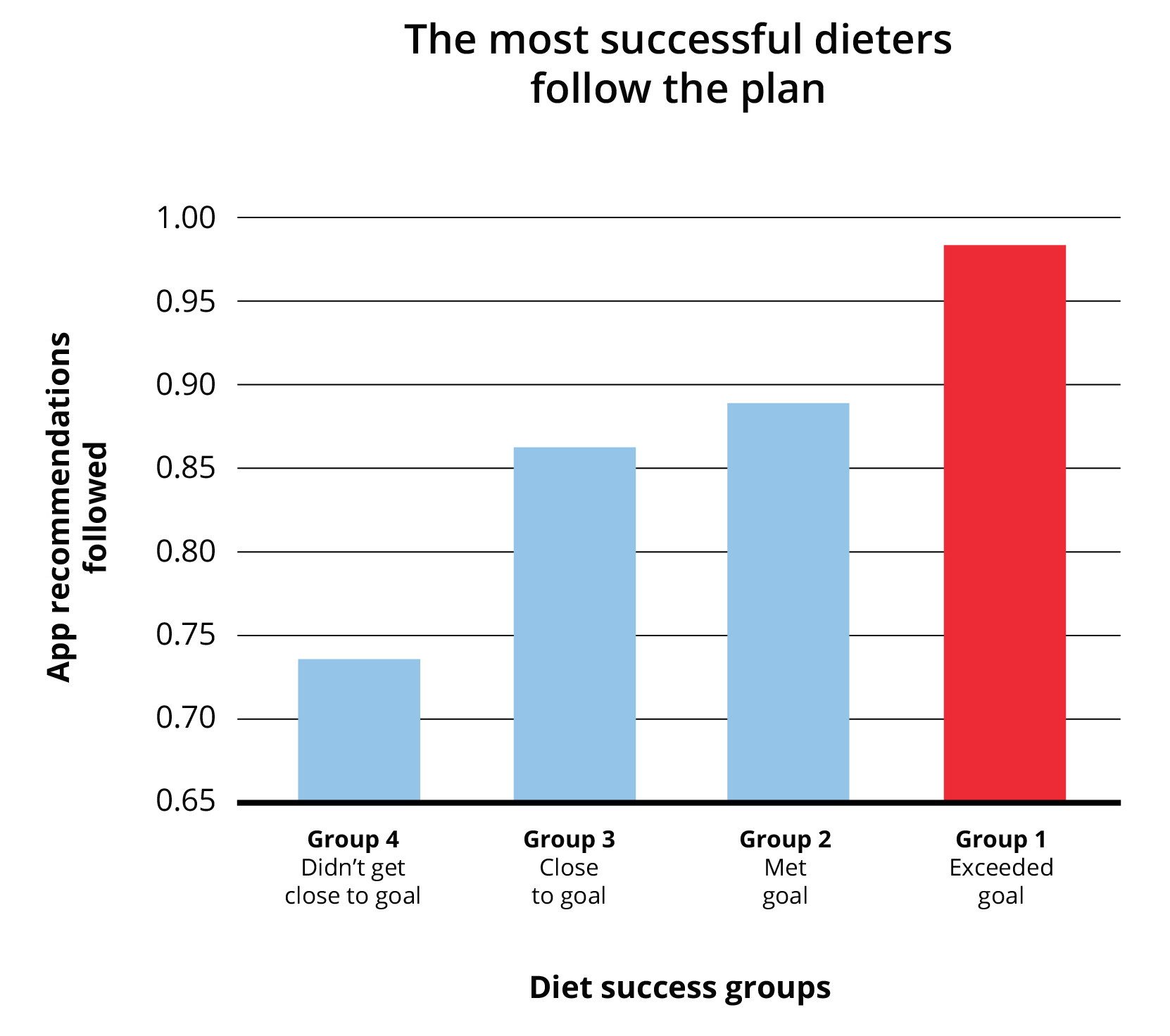 We cannot say conclusively based on these data that dieting for shorter periods of time or following the app’s AI recommendations will result in more success, but at first pass it appears that the most successful dieters exhibited both of these behaviors more. We do know from other research that following a plan and limiting hard dieting to shorter durations both have benefits for weight loss, which supports what we are starting to see here with the RP Diet App. If you have had some less than successful diets (or even fairly successful ones), perhaps try a shorter diet and take the app’s recommendations seriously next time. A chance at more success across a shorter dieting period is worth a shot!