← Back to the Store

What You'll Get?
FAQ 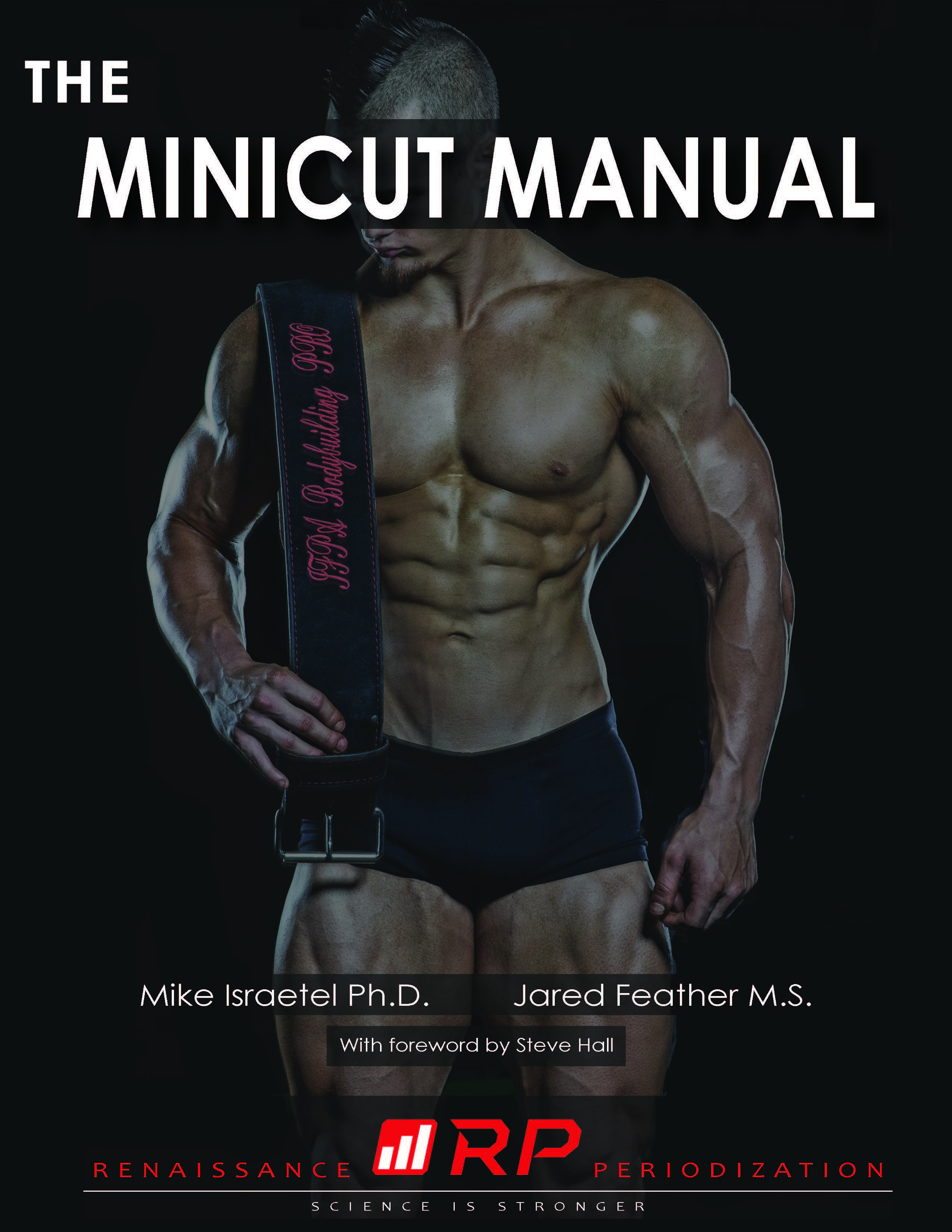 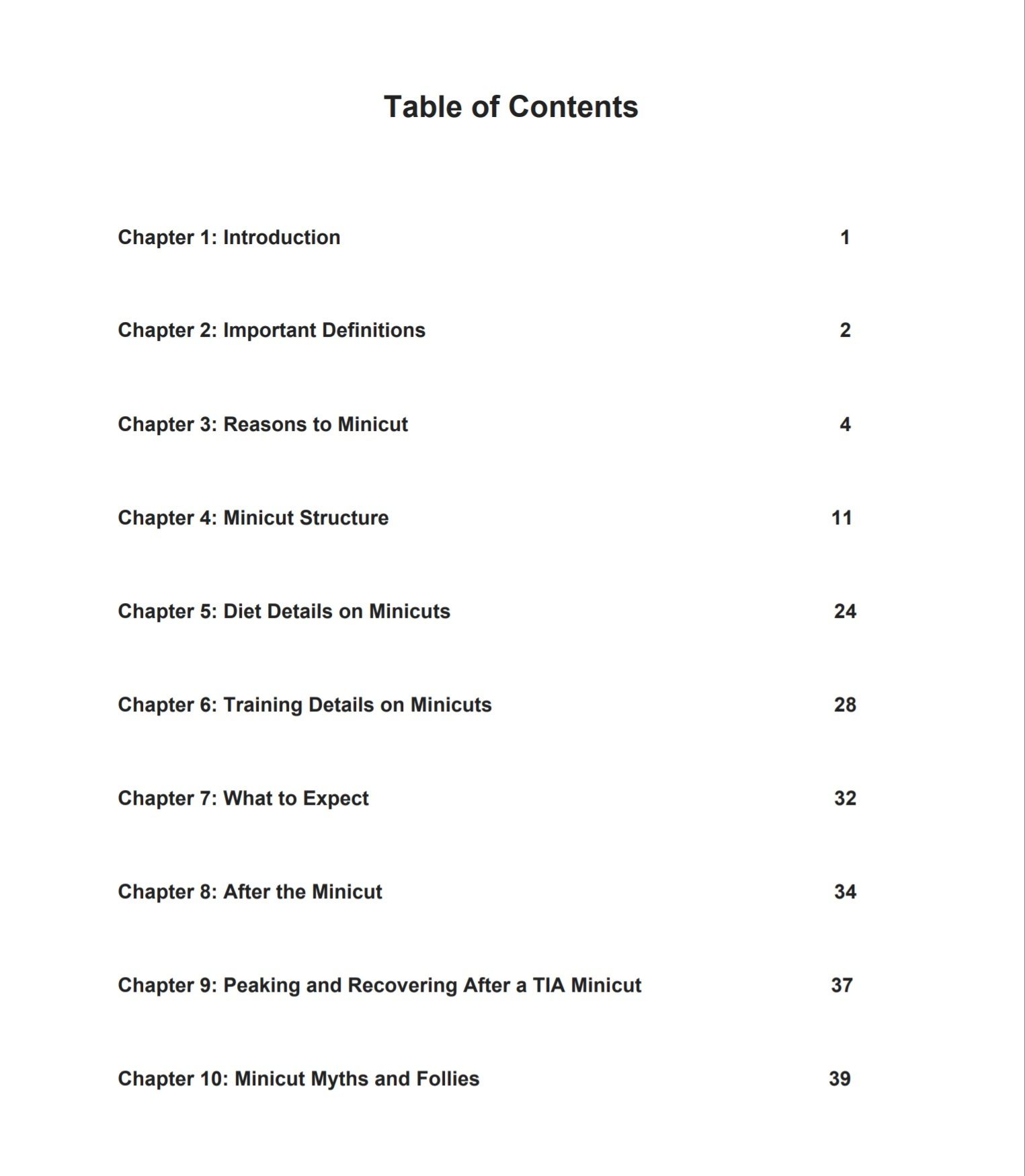 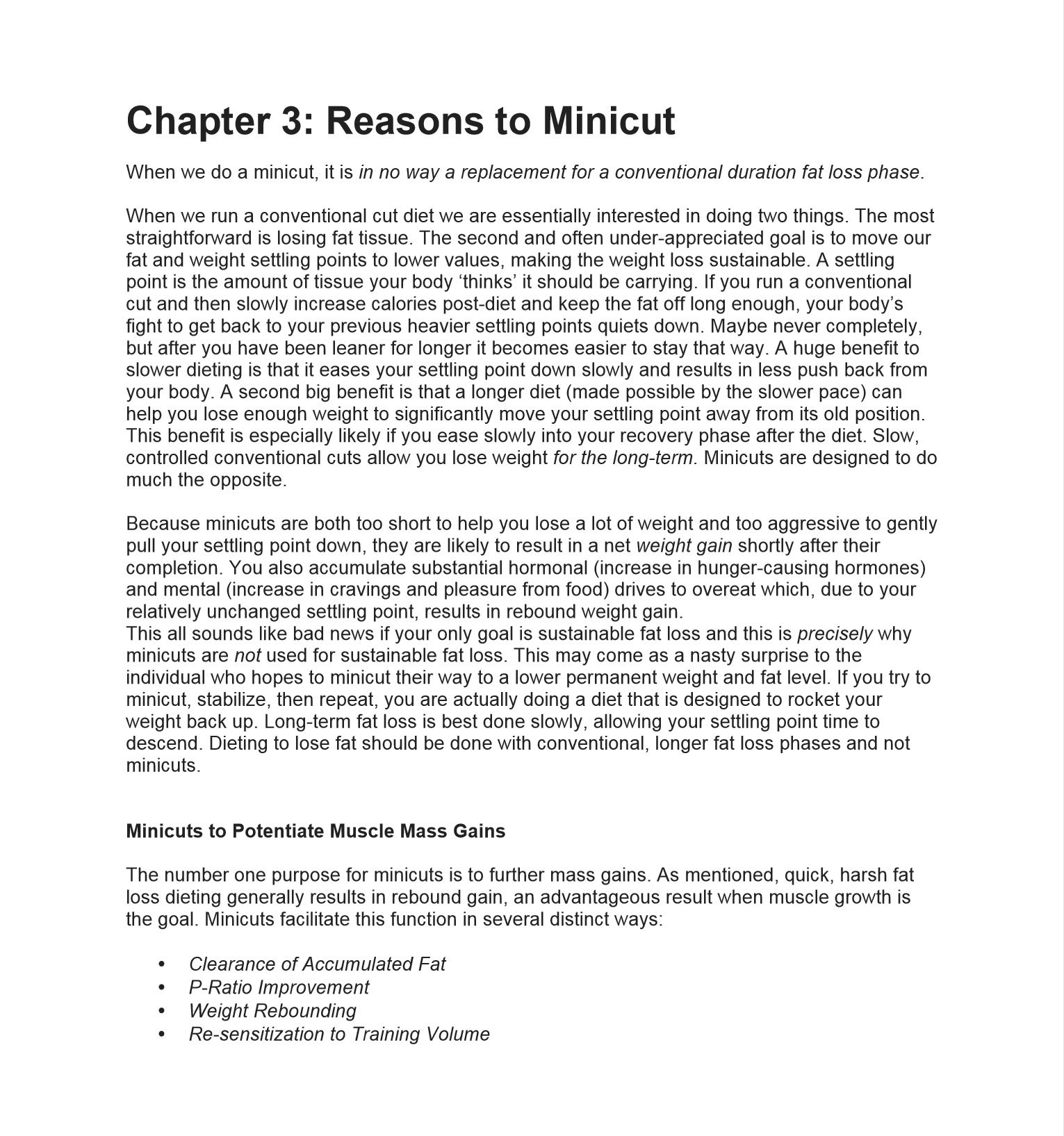 What You'll Get?
FAQ

Get it on Amazon

Minicuts are short periods of slightly more aggressive dieting, which are designed to reduce body fat quickly, though only by a small margin. Their highest benefit is to help those on a muscle-gain mission gain more muscle and less fat over the long term.

What does the eBook contain?

Sets up the reasons we wrote the manual and what we hope it can help you with.

Brings you up to speed on important terms and concepts that are critical for understanding the rest of the recommendations in the manual.

Describes the avenues in which minicuts can beneficial and of course the ones in which they do more harm than good. Outlines and describes the two different types of minicuts that are worth doing and all the other kinds that aren’t.

Describes and explains various elements of minicut design, including how long minicuts should be, how aggressive the calorie deficits should be, and how those factors change depending on the circumstances.

This massive chapter also covers the proper placement of minicuts in a periodized macrocycle plan for getting bigger, leaner, and even competing in physique sport if desired. Highly detailed graphics of periodized plans are included!

How to alter your diet when minicutting, with all the details included, especially on how to choose calorie deficits to hit particular weekly weight loss rates. Also gives a guide on how to transition from muscle gain phases to minicuts and back, as well as instructions on how to use the RP Diet Templates for minicutting purposes, if you so choose.

How much to train, how heavy, and all the how’s and why’s.

Chapter 7: What to Expect

Tells you what to expect during and after your minicut so that you’re not taken by surprise, and potentially make poor adjustments as you go through your minicut.

Describes in detail how to transition out of a minicut, what to do about deload weeks after minicuts, how quickly you’ll start hitting PRs again, and everything in between.

Chapter 9: Peaking and Recovering after a TIA Minicut

How to finish a minicut designed to sharpen your appearance and set up your best look at a specific date of your choosing by manupulating training, food, and water parameters.

From using minicuts instead of longer fat loss phases to try and lose fat to training too much or too little, we’ve got 10 myths and common questions covered in detail in this last chapter of the book.

Do you offer refunds?

There are no refunds on our eBooks. All sales are final.

How / when will I receive my product?

All digital RP products can now be downloaded at the time of purchase, we no longer email them to you.

Confirmation emails are sent out shortly after your order is completed. Please be sure to check your spam, promotions, or updates folder as sometimes our emails are sent there.

Fun fact: You can re-download any product you've previously purchased from the Downloads page of your RP account portal (accessible once you log into your account).