In 2013 I was 320lbs, fresh out of a long term abusive relationship, depressed, had zero direction in life and was wondering if this was just the hand I was dealt. Eventually, after a lot of emotional changes, I knew it was time for a bigger change and asked my brother to help me in the gym. He put me through a fairly easy workout (mostly just bodyweight movements) and about halfway through I ran outside to get sick, and he figured that was the last he’d see of me, I’m sure. My family had seen me go through so many phases of trying and quitting, so who could blame them? But as I was outside, leaned up against the building getting sick, I told myself that and I was done quitting and walked back inside to finish the workout.

Shortly after I began working out, I made changes to my diet. In the beginning, I’d cut out small things one by one – things like regular soda first, then fast food, etc. I then found My Fitness Pal and began tracking calories, not macros, and the weight just started falling off. The more progress I saw, the more intrigued I became with nutrition in general. The more I learned, the better results I saw, and eventually found myself 130lbs lighter, from 320lbs to 190lbs.

Last year, in September (2016), I wasn’t doing any type of dieting, let alone tracking food intake. I felt like everything around me was spiraling out of control and I had gotten back up to 208-210lbs. I had seen RP on social media and followed their pages, but I was too proud to have anyone help me with my diet after losing 130lbs on my own until I budged in October and purchased my first RP diet template. 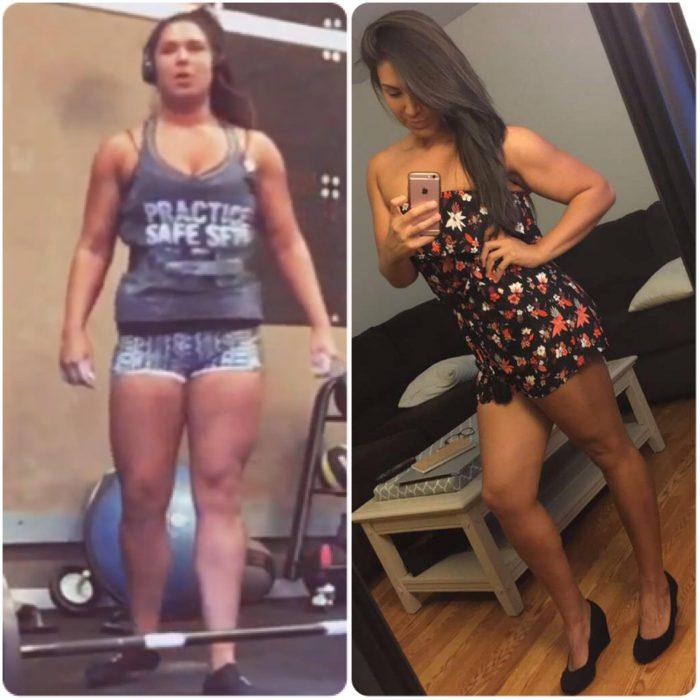 The above is the transformation while using the RP diet templates!

I started RP and was scared to death when I saw the template. So. Much. Protein. But as a powerlifter that wanted to really lose body fat, get stronger, and bring back my healthy relationship with food, I was willing to try anything. Within days, I noticed a difference – no matter how dramatic that sounds, it’s 100% true.

It’s been a year, and I’m down to an all-time low in the 180’s and the happiest I’ve ever been with myself. In the time I’ve been on RP, I had healed from a three disc herniation and a torn hip labrum, and while cutting on my RP template and after being told I’d never touch a barbell again after my injuries, I came back with a 350lb squat (370 previous PR), 200lb bench (175 previous PR), and the easiest 375 deadlift of my life (380 previous PR) at a significantly lower body weight than before. RP not only kept me in the Powerlifting game by allowing me to get stronger while losing weight, but it brought me to have the best relationship with food and body image that I’ve ever been in.