Alcohol: the most popular drug on the planet. Likely loved for its anxiety-reducing effect, there are records of its use as far back as 10,000 BC, and it’s estimated that on average, each adult consumes approximately 4.3 L of pure alcohol per year.

People have called it the 4th macro. It provides your body with 7 calories per gram, but because it isn’t essential for survival it’s not typically mentioned alongside protein, fat, and carbs, as it’s not commonly found in food.

Alcohol has no nutritional value aside from providing calories. From this alone, alcohol doesn’t seem a great choice for health nor performance. You’re consuming calories without any vitamins, minerals or fiber. This is especially problematic if you’re dieting or struggle to keep your caloric intake low.

Also, alcohol is often drunk at social events (which already promote overeating by themselves). Alcohol affects not only hunger but impulse control as well. Being even mildly intoxicated makes you more prone to go off-track on your diet, and consume more calories than you should. 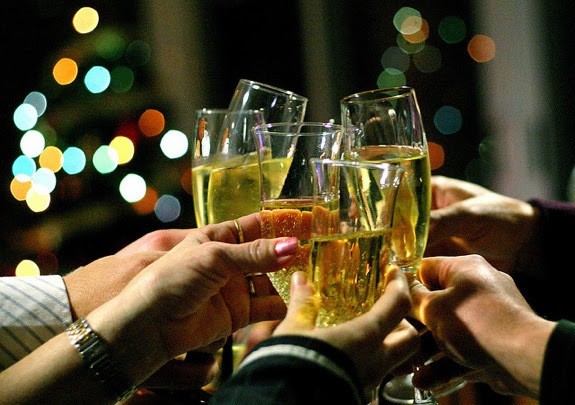 Studies show that alcohol intake blunts fat burning, and it’s considered fat promoting by the general population. However, alcohol by itself doesn’t make you fat. The body simply considers it a poison and has priority for metabolism. It suppresses fat oxidation, but also carb and protein oxidation. During the time alcohol is being burnt, nothing is happening, and none of the alcohol gets stored. Some may argue this is bad since we could have burnt fat during this period, but such short time frames have little relevance when considering net fat gain or loss at the end of the day. Like everything else, you only gain weight if you’re in an energy surplus, alcohol doesn’t change that. Of course, the extra calories from alcohol can put you in a surplus, and that will make you fat, but that’s up to you to manage. This article will focus mostly on the effects of alcohol, and not their caloric content. (Pro tip: dry wines and spirits contain the least calories)

Beyond calories and nutrients, alcohol is known to directly interfere with hypertrophy. It causes suppression of mTORc1 and has shown to reduce leucine oxidation while measuring liver protein synthesis, which is a marker of muscle protein breakdown.

This doesn’t automatically mean you can never have it. Everything is fine in moderation as the saying goes. But what exactly is moderation? 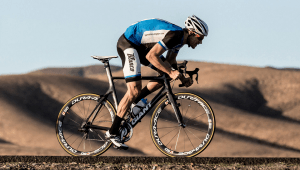 Aerobic training seems to have a greater interference from alcohol.

These recommendations are for health, but they may give some insight for performance as well. Because if the dose is reasonable, alcohol usually doesn’t show any negative effects.  Aerobic training seems to suffer more from it, but again, it’s dose dependent. Binging does affect performance, but that’s obviously outside of moderation, and it shouldn’t be news to anyone.

However, these are short-term studies. If you’re a very serious athlete, even if not binging, I would still recommend reducing alcohol intake if possible. According to “Alcohol: Impact on Sports Performance and Recovery in Male Athletes” by Matthew J. Barnes, a dose of approximately 0.5 g/kg body weight is unlikely to impact most aspects of recovery. Assuming an average weight for males, that’s around 40g.

For reference, on average a beer has roughly 1g of alcohol per ounce. Wine has 3g, and liquor has 9g. So to hit 40g, that would be 40 ounces of beer (3 beers), 13 ounces of wine (3 glasses), or 4 ounces of liquor (2.5 shots). These are all averages, so if you drink alcohol regularly and want to know the numbers precisely, you should do the math yourself since the numbers can be slightly off. 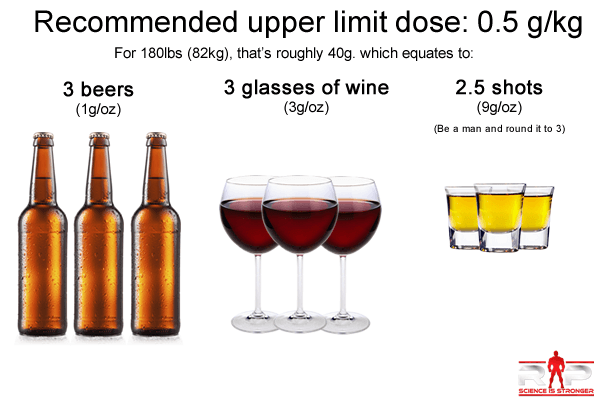 Remember this is a guideline for an upper-limit dose. And I would certainly not recommend to do this every day. For this bodyweight, you can have about 3 units, which if we follow the guidelines we first mentioned, you can do it 4 times a week before hitting the 13 weekly unit limit for men. But again, these recommendations were for health. If you lift recreationally, that may be ok, but if you compete, I’d recommend cutting them in half, resulting in about 2 times per week if you hit the upper limit each time.


It’s worth mentioning that some people have the position that any alcohol amount is detrimental, and the less the better. For example in this study, alcohol suppressed the induction of protein synthesis and mTORC1 signaling, even after 12h. This is nothing new, but it’s interesting because the dosed used was 3g/kg, which according to this, would be around 0.25g/kg in humans. However this was done in mice, so it should be taken with a huge grain of salt. I think this provides valuable insight, but I wouldn’t make practical recommendations from it. Regardless, it does support the idea that high-level athletes may want limit alcohol consumption if possible, even if moderation consumption seems harmless in general.

It would probably be smart to try to distance your drinking from training times as well. Such as not drinking on your training days, or at least not include alcohol in your pre and post workout meals. For example on this study rates of MPS were reduced by 37% in a group consuming alcohol with maltodextrin 1h before training. Consuming whey protein instead of maltodextrin was able to somewhat blunt the effect, but it was still reduced by 25% compared to protein alone. However the dosed used was quite high, 1.5g/kg, which is 3 times the recommended upper limit. Applying this to moderate drinking would be a big jump, but it tells us that mixing drinking and training may not be a good idea.

Alcohol is also known to disrupt sleep. Alcohol’s inhibition of REM sleep has been observed since the 1960s with high dosages (1g/kg) before bedtime. In this review, it claims even a moderate alcohol dose (0.45 g/kg) suppresses REM sleep. However, sleep latency or sleep time weren’t affected, so it doesn’t seem the effect was very strong. If such a change in sleep was significantly enough to be detrimental,  then we would see in clinical trials that even a small/moderate alcohol dose would hurt performance. Since that’s not the case, at least for anaerobic exercise, it’s safe to assume the change in sleep isn’t enough to interfere with performance if the dose is low. This may be a compensatory effect. Even though in this review it said it didn’t have an effect on sleep time, it may have with a lower dose, and a positively one at that. For example in Stone 1980, a 0.16 g/kg dose (almost 3x lower than the one used in the research review) increased sleep time and awake activity was reduced. Because REM sleep is reduced (even at the 0.16g/kg dose), but sleep time and awake activity may improve, the effects might cancel each other out at a low dose, or at least blunt the negative impact of reduced REM sleep. However it’s important to note that the tolerance to alcohol’s sedative effects probably develops rapidly and it’s most predominant in insomniacs. Consuming low dosages of alcohol in order to improve sleep is not recommended. 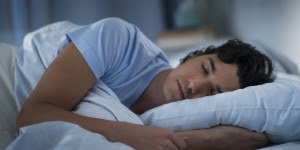 The effects of alcohol in sleep seem to be dose-dependent. It’s not totally where the line is drawn, but low dosages seem to be unlikely to affect sleep to a significant degree.

With a higher dose, the scenario changes completely. For example in this study, they followed 19 rugby players for 2 days after a heavy drinking episode. Sleep hours questionnaires were used, and it was reported that many participants only got around 3h of sleep, compared to 7-8 when the subjects were not drinking.

The timing of the alcohol consumption is important as well. As a rule of thumb, a person can eliminate one drink per hour. Consuming alcohol as further away of bed-time as possible will help to lessen any potential negatives of alcohol in sleep. If we take the upper-limit established earlier, it would be recommended to consume your alcohol beverages at least 3h before bed time. I’d advise to keep this time limit even if you don’t reach 3 drinks or increase it slightly to give you a safety net.

Lastly, if there’s a specific event where you know you’re likely to over-consume alcohol (which is obviously not recommended, but life happens) , try to time it in a manner where you don’t have heavy training the next day (or no training at all). With a high alcohol consumption, comes the known “hangover”, which will cause drowsiness, fatigue, dizziness and countless other undesired side-effects. There’s no miraculous cure for it, but it’s known dehydration is one of the key factors, so make sure to drink a lot of water.

Alcohol is part of many people’s lives. If it’s something you enjoy doing and hard to avoid, then you should try to make it fit into your lifestyle. Despite having potentially negative effects on performance, it’s unlikely to be significant with a moderate and responsible consumption.

If you’re the type of person that can’t or doesn’t want to drink in moderation, then you may want to lessen the damage as much as possible, and Menno Henselmans’ article might be of interest to you.